A businessman, an organization supporting rural communities, and a student group that helps vulnerable children have been recognized this year.
By Asael Villanueva | CONECTA NATIONAL NEWS DESK - 09/05/2022 Photo Udell Jiménez

Businessman Luis Salvador Alcalá, the Alternare organization, and the De Raíz student group have received the 2022 Eugenio Garza Sada Award for their contributions to the development of Mexico.

Tec de Monterrey and FEMSA presented the award to the winners for being an example of the values instilled by the institution’s founder when he was alive, during a hybrid ceremony held at the Monterrey campus Conference Center.

José Antonio Fernández, Executive President of FEMSA and Chairman of the Board at Tec de Monterrey, acknowledged the legacy of Don Eugenio Garza Sada.

“(Don Eugenio) is recognized as one of the greatest leaders in modern Mexican history. Based on his humanistic vision of defending freedom and an ethic of service, he oversaw the construction of institutions that have transformed the lives of millions of Mexican people,” he said.

Businessman Luis Salvador Alcalá was the winner of the Humanistic Business Leadership category.

“Receiving the award compels me to be a better citizen who is more constant and ethical, to work on being better and supporting education, remembering that having doubts is the best support for the people around us,” said Alcalá.

He has served as President and Vice-President of the Industrialists Group of Aguascalientes, where he dedicated a portion of his efforts toward education by providing training to 1,000 higher education students in Aguascalientes.

From his perspective, it isn’t just about generating wealth, but about ensuring the wellbeing of the community and workers, whom he considers his extended family.

Through his companies, Don Salvador Alcalá, aged 85, has implemented community support programs in the areas of business, health, food, family, and education.

Over the course of 45 years, he has impacted more than 100,000 people through various institutions focused on different fields, which led to his recognition by the Aguascalientes City Council as “Distinguished Son of the City” in 2021. 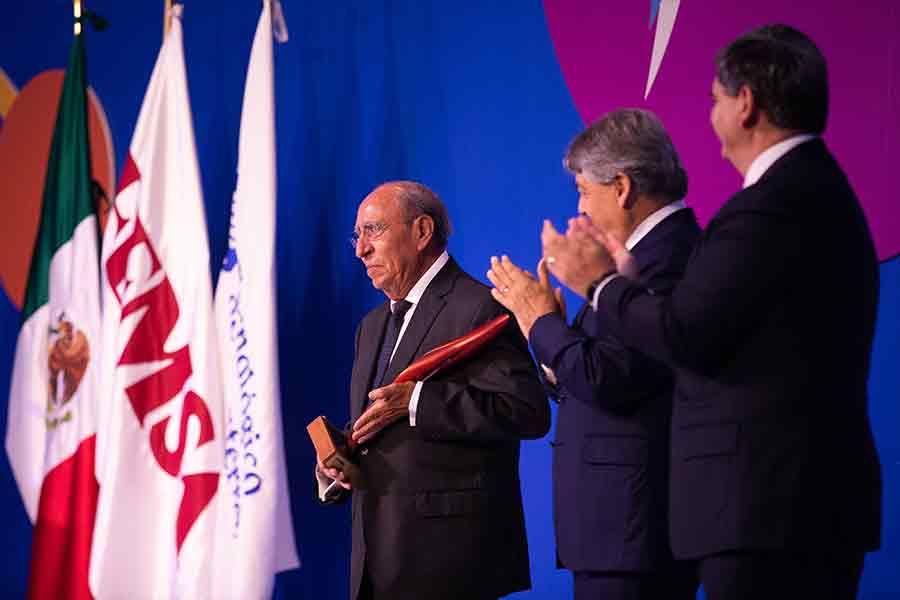 Alternare: for the development and wellbeing of rural communities

The Eugenio Garza Sada Award in the Social Entrepreneurship category was awarded to the Alternare organization for its work in rural communities and ejidos (communally held land) in Mexico.

“(I dedicate this award) in particular to the indigenous communities and ejidos who believed in our project and trusted us to exchange knowledge and forge a project,” said Maria Guadalupe del Río Pesado, CEO and Co-founder of Alternare.

This organization was created to support around 350,000 people living in poverty after the restriction of forest use in the area surrounding the Monarch Butterfly Biosphere Reserve in 1985.

Alternare was founded by two biologists and two farmers who have worked for 22 years on a conservation model for the area where the monarch butterfly hibernates, helping rural communities and ejidos in the region.

Through their model, they seek to ensure that communities utilize resources in a sustainable manner, create projects in order to generate economic resources for their families, and are trained in food safety and housing improvement, among other things.

Alternare has worked with more than 124,000 people from 37 communities, one third of whom are from indigenous communities in four municipalities of the State of Mexico: Temascalcingo, San Felipe del Progreso, Donato Guerra, and Villa de Allende.

Alternare has also been recognized by the Food and Agriculture Organization of the United Nations, the Inter-American Development Bank, and organizations such as the Organization of American States and the U.S. Fish and Wildlife Service.

“I would like to end with a reflection: working together will change Mexico. The four of us have made some differences. Together, Mexicans can make the country we dream of.” 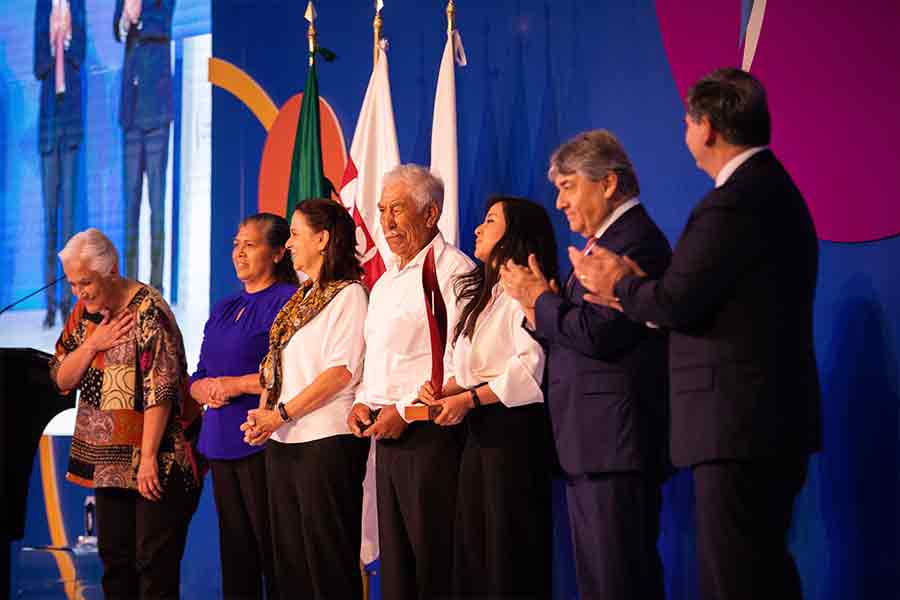 The De Raíz student group, from PrepaTec’s Santa Fe campus, was the winner of the Student Social Innovation category, which it received for its work with children in vulnerable situations.

This group focuses on mentoring boys and girls for 10 to 12 weeks, seeking to develop skills and provide them with opportunities to improve their quality of life in the present and in the future.

Their main objective is to achieve integrated development and reduce educational and poverty gaps.

“We’d like to thank the institution and pledge our commitment of striving to make a change in our school and our country today and in the years to come,” said Monserrat Cruz, President of De Raíz.

The mentors are students who receive training and tools to be able to carry out personalized mentoring focused on the personal context of each boy and girl in the program.

“De Raíz” has worked with various associations such as “Fundación Ayuda Amiga” and the Carlos Fuentes Library, focusing their activities on the José María Tapia Freyding Primary School, where they have mentored 141 boys and girls.

Nearly 200 proposals were received in this category at a national level. 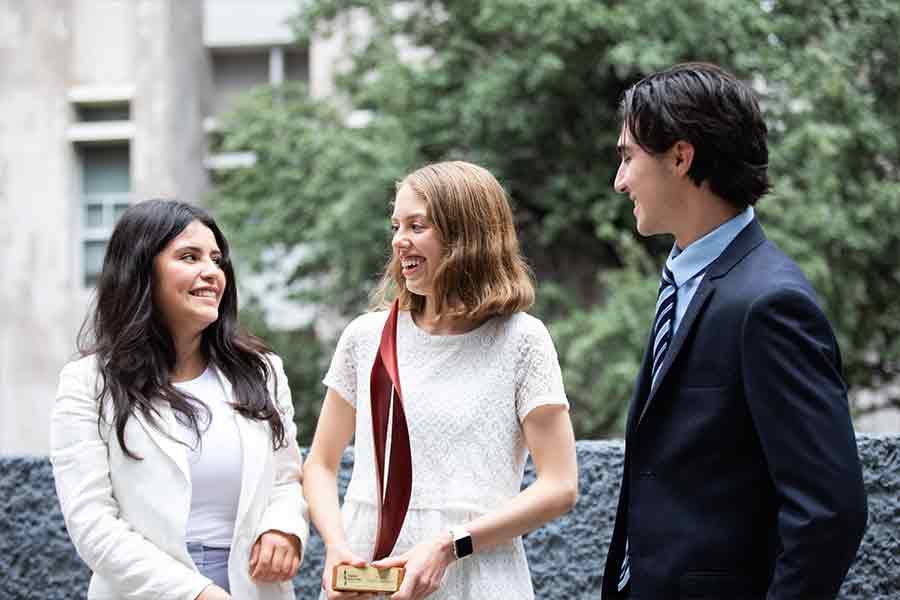 The 29th annual award ceremony began with the performance of “Legacy of an Entrepreneur” by the Tec’s Youth Orchestra.

The purpose of the award, which received 458 applications this year in the 3 categories, is to recognize business leaders and national or foreign institutions, as well as students from Tec de Monterrey and Tecmilenio, who lead projects with high social impact for the communities of Mexico. 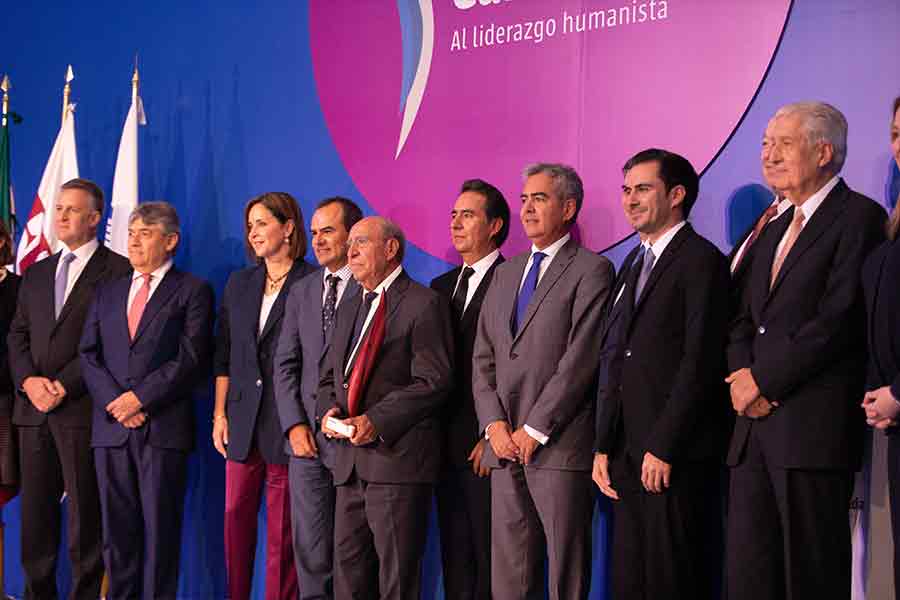 Fernández pointed out that the winners have followed Don Eugenio Garza Sada’s example by contributing to the development of the country through actions that raise the standard of living and wellbeing of communities.

“It’s very important to learn from historical experience, but this should not be an obstacle for a country and society to plan and build their future.”

The Chairman of the Board at Tecnológico de Monterrey recalled an example given to him by a professor at the Tec:

“It’s what we do when driving a car: the rear-view mirror is useful as a reference on a few occasions, but we always have to look ahead, driving towards our future.”

“For this reason, I propose a change in attitude: let’s think big, taking a broad and, more importantly, long-term view. Let’s think about the future and not the past. Let’s imagine what Mexico could be, not in one or two years, but in twenty, fifty, or a hundred. In other words, I invite you to reinvent ourselves,” he added.

For his part, David Garza said: “An active commitment to society was fundamental to our founder. The Eugenio Garza Sada Award is a recognition of the actions of people or organizations that are working to the benefit of others and carrying on his legacy. Congratulations to the winners for their dedication to serving the community.”

“It’s very important to learn from historical experience, but this should not be an obstacle for a country and society to plan and build their future.”

The Eugenio Garza Sada Award was established in 1993 by FEMSA and Tec de Monterrey to perpetuate the legacy of this entrepreneur and social leader.

This award recognizes leading national or foreign individuals and institutions that contribute to the wellbeing of the Mexican community through the development, improvement, and productive capacity of its human or physical resources.

The award winners received the “Inner Light” sculpture by Yvonne Domenge, a written acknowledgment, and a cash prize, depending on the category, which amounts to 2 million pesos for the 3 projects recognized.

The latter two will also use a percentage of the prize money for an international experience in a leading entrepreneurial ecosystem.

Additionally, the winners’ names were engraved on the Mural of Recognition, a memorial made to Don Eugenio Garza Sada located on the Monterrey campus.