From the Davos forum, where Tec de Monterrey was the only Latin American university invited, rector and executive president, David Garza, spoke about its participation

Universities' vision is crucial in meetings suchas as the World Economic Forum meeting of Davos, estimated David Garza, Tec de Monterrey’s Rector and Executive President in an interview from the forum.

Tec de Monterrey was one of 17 universities officially invited to this meeting of global leaders.

“The meeting provides a large congregation of stakeholders, from different sectors and locations, to discuss the challenges we face today.But above all, to discuss the future,” he said.

Garza shared his experience in an interview with CONECTA from Davos, in which he talked about the relevance of the universities' participation. 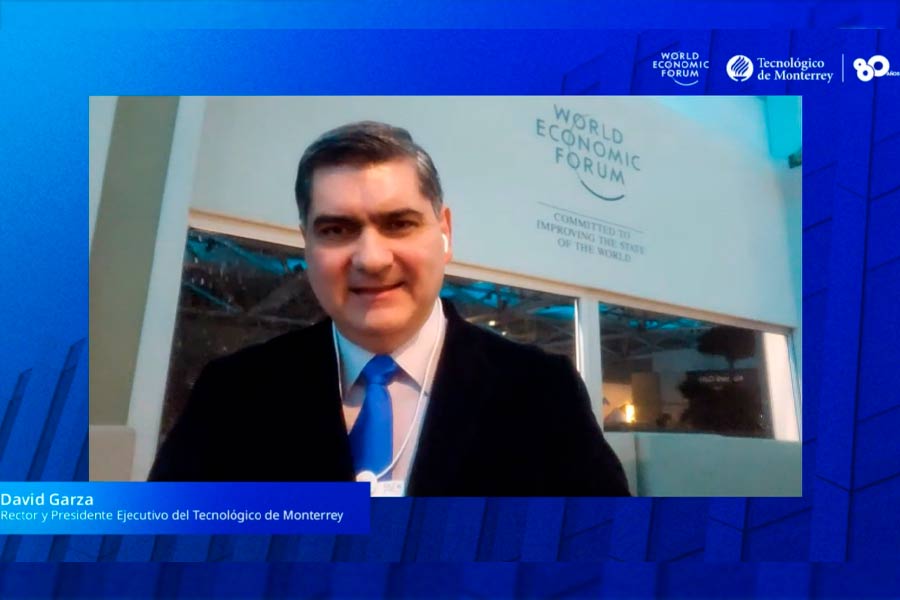 Garza shared that in a meeting of several university leaders with Klaus Schwab, Executive Chairman of the World Economic Forum, the importance of universities was highlighted.

Schwab, said Garza, reflected on the development aspects that require collaboration and also on the knowledge generated in universities.

“He told us that the role of universities is crucial, specifically on these topics of cooperation and collaboration, in this context of a fragmented world.

“(By participating), we as universities are enriched because it’s about having a view of everything being discussed and happening around the world. Conversations come up on current trends that are crucial going forward,” he added.

“It’s a source of great pride for our country, Mexico, that out of all the countries in Latin America, Tec de Monterrey was the higher education institution invited this year,” Garza emphasized.

Garza estimated that the institution was invited to participate in this dialogue due to the innovation that it has reflected in its work.

“Undoubtedly, it’s because of that role they see the Tec playing, which is not just in our country, but also the influence we have in the region".

"We’re an educational institution with geographic presence in different places and we dare to do innovative things.”

He also shared the vision that Klaus Schwab, CEO of the World Economic Forum, expressed to him about Tec de Monterrey.

"When I greeted him and introduced myself, I said: ‘(I represent) Tecnológico de Monterrey in Mexico. His reaction was: ‘Oh, a very important and prestigious university’ ” he said.

Garza mentioned that attending this summit was important for the axis of internationalization that the institution seeks as part of the three “I”s of the institution’s development strategy, alongside investigation and innovation.

“The themes discussed at the meeting are related to these topics. So, it’s about all these elements, which make us very pleased to represent the region, our country, and Tec de Monterrey, in a special year when we’re celebrating our 80th anniversary,” he added.

Roundtables the Tec participated on

The roundtables the Tec participated on included a session of the Global University Leaders Forum, which discussed the roles of universities in tackling different challenges in a fragmented world.

“We talked about challenges in economic areas, geopolitics, the transition we’re experiencing toward clean technologies, and the digital transition. These ideas come up in conversations like these,” said the rector.

What’s more, the institution participated in The Edison Alliance, a platform that is looking to eradicate the global digital divide. Here, the Tec was one of two universities to take part, alongside companies and governmental agencies from different countries around the world.

“It was another of the roundtables we took part in. Basically, it was about how we’re seeing one important aspect of economic and social transformation has to do with these technological adoptions of artificial intelligence, augmented reality, and metaverses,” he added.

He also spoke about a third roundtable the Tec was invited to take part on, the Global Collaboration Village Science Campus, which focused on the topic of metaverses to define, learn about, and shape this concept in enterprise, government, and education sectors, to name but a few.

“We were invited as universities to form a council for guiding the evolution of one section of the World Economic Forum metaverse dedicated to educational topics. That gave us the opportunity to share the Tec’s own experiences in virtual reality courses and classes on virtual campuses,” he said.

The Tec was also invited to participate in the sessions of Reskilling Revolution Champions.

“We as universities are enriched because it’s about having a view of everything that’s being discussed and happening around the world.”

When sharing his experience of the Davos meeting, Garza mentioned that he has had the opportunity to share spaces with leaders from several countries and people who want to make a global impact.

“One anecdote is that I struck up a conversation with the person in front of me as I was lining up to enter one session. It turns out that he’s an entrepreneur who’s going to launch a low-cost supersonic passenger plane next week.

“Then, as we were waiting for the meeting to start, I was next to the Minister of Culture for Lithuania, a country that is very close to Ukraine. Talking to them and having these interactions was a very interesting thing,” shared Garza.

“It’s a source of great pride for our country, Mexico, that out of all the countries in Latin America, Tec de Monterrey was the higher education institution invited this year.”

The rector of the Tec mentioned that he has also attended meetings of small groups and plenary meetings during this summit, which have provided him with learning and inspiration.

“Something that sticks in my mind as a result of everything that’s happening and the conversations we’re having, is that many of the things we’re doing at Tec de Monterrey are on the right track and I repeat that as a country, we have great opportunities.”

Garza has also been able to attend roundtables that, despite not discussing educational topics, did include the participation of relevant stakeholders in other aspects, such as the future of work, in which there was discussion of the need for talent and the role of technology.

The rector highlighted a phrase he heard from Volodymyr Zelensky, the President of Ukraine, on leadership.

“(He said) we need leaders who take fast and decisive actions. That’s also a message that stayed with me (...) as something that applies in many other contexts. It’s something we should keep in mind,” he said.

YOU CAN SEE THE VIDEO INTERVIEW WITH CONECTA HERE (IN SPANISH):