She didn’t give up: full Tec scholarship and going to Amazon Germany

The young woman, who is studying Innovation and Development Engineering at the Tec’s Monterrey campus, is on the fourth cohort of the Leaders of Tomorrow program.
By Ricardo Treviño | CONECTA National News Desk - 12/02/2021 Photo Eric Ramírez, Cortesía Lizzie Vázquez

When she was in high school, Lizzie Vázquez was determined to learn a third language, German. In addition to being an excellent student, she volunteered in soup kitchens for children and nursing homes in her free time.

It was around this time that her life took a 180-degree turn, when her family began to experience financial problems, but neither she nor her parents gave in to the hardship.

Her efforts to be well prepared and her mission to help others led to her obtaining a full scholarship (Leaders of Tomorrow) from Tec de Monterrey, becoming an international student, and being recruited by Amazon Germany in the field of logistics.

In an interview with CONECTA, the 22-year-old shares how she achieved her goals through an attitude of not giving up on challenges, such as when her family lost their home because they could no longer afford it just before she decided to study at the Tec.

“An eviction notice came, saying we had three days to leave. Right then I realized that the situation was bad. How could I tell my dad that I wanted to study at the Tec if there was no way to afford it?” she recalls. 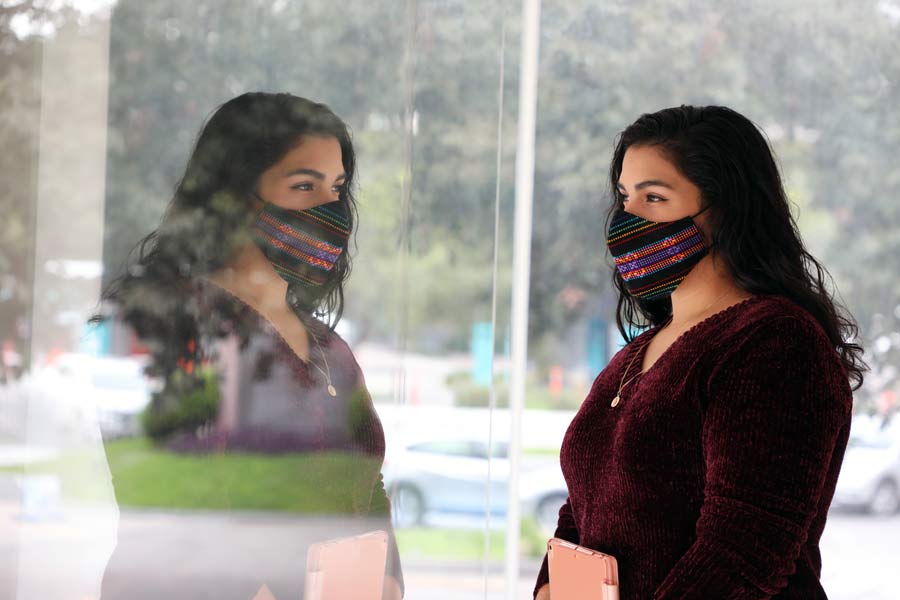 Amazon Germany found her on LinkedIn

At that time, Lizzie and her family were urgently looking for a new home. Today, she is again looking for a home, but this time in Germany thanks to a professional opportunity.

“The focus (of my studies) is on Logistics and the Supply Chain, so my intention was to work at companies like Amazon“.

She never imagined that keeping her LinkedIn profile updated would open the doors to Amazon Germany, a company she will join between January and March 2022.

Being an engineering student about to graduate with knowledge of logistics, international experience in Germany, and a command of the language was what attracted a recruiter and led to her being offered a job.

“I like Amazon because even though it’s a global company, it still has that essence of a startup, of technology, and of seeing how to automate distribution centers,” she says.

“The most valuable thing (...) is that there are people who still believe in dreams. When you ask for support, they believe in your ability to achieve.”

“We either paid for the house or for food”

Lizzie still remembers how her mom gave her a shot of encouragement to study at Tec de Monterrey when she asked her where she would like to do her professional studies.

“‘You know I always wanted to (study at) the Tec, but the situation is difficult,’ I told my mom.”

The young woman from Monterrey knew about the Tec because her father had had the opportunity to study at the institution on a scholarship. However, for various reasons, he had to abandon his studies.

At that time, her father had started a new business after losing his job, so the family’s economy wasn’t stable yet. They even sold their cars and went into debt to get by.

“We either paid for the house or for food,” she says.

Lizzie mentions that there was a moment of silence. Finally, her mother looked at her and spoke these words that are engraved in her heart:

Despite her family’s difficult situation, Lizzie kept her zeal for volunteering and kept up her excellent grades so she could continue to shine as a high school student. 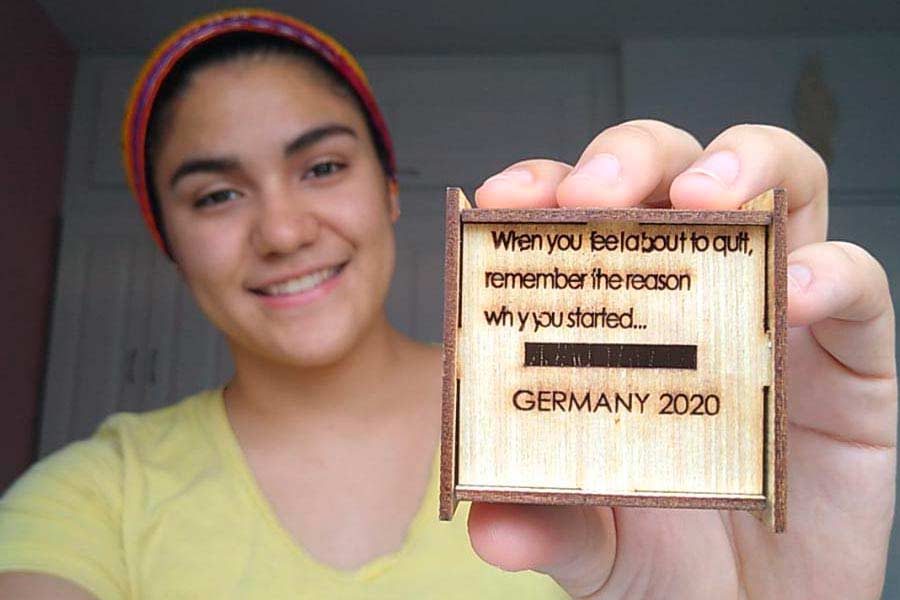 Losing a house, but winning a scholarship to the Tec

Out of 12,000 applicants, she was one of the 200 young people selected for the Leaders of Tomorrow (LDM) scholarship.

This is a Tec de Monterrey program that supports talented young people to study on full scholarships at the institution because of their talent and social leadership, regardless of their socioeconomic status.

“Thank God a couple who found out about our situation supported us with a house they had nearby.”

Already more at peace in that respect, Lizzie fulfilled all the requirements to end up shortlisted for this scholarship.

She remembers the day she checked the results to find out who would make the fourth cohort of the program.

The results page said “Accepted,” and she began to cry with emotion. She then looked for her parents to share the news.

“My dad (later) said to me, ‘Did you realize that what you gained with the scholarship is what we lost with the house?’ God always finds a way to reward you in some way, but He always rewards you,” recalls Lizzie, her eyes welling up with emotion.

She also received a distinction from the Monterrey businessman Eduardo Garza T. Fernández, who later supported her so that she could have an international experience.

“My dad (later) said to me, ‘Did you realize that what you gained with the scholarship is what we lost with the house?’” 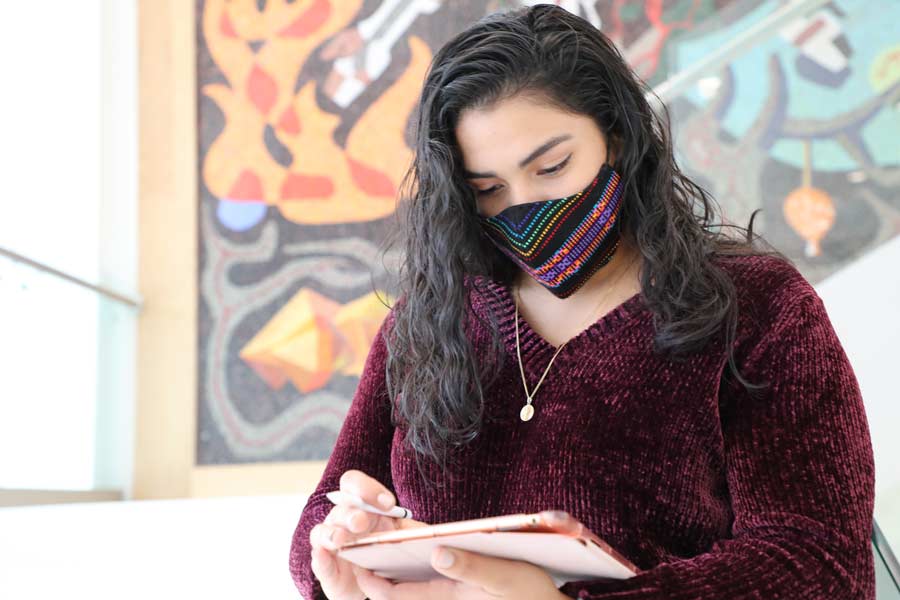 Knocking on doors to fund her exchange program

Her parents instilled in her the value of education. Lizzie had already managed to study at the Tec and was willing to take advantage of all the opportunities she had to grow, such as having an international experience despite the challenge of financing it.

She was accepted to study at one of Germany’s most prestigious universities, the Technical University of Munich (TUM).

“I knew it meant a lot of money. The German embassy asks you for a balance of 800 euros for each month you’re going to be in Germany, and I was going to be there for 10 months,” she said.

After taking several German exams, she was selected for a scholarship from the German Academic Exchange Service (DAAD), which covered half of it. The challenge was to complete the other half.

The key was María Musi, Leaders of Tomorrow funds collaborator. She advised her with her crowdfunding campaign and encouraged her to go to the businessman Eduardo Garza T. Fernández, founder of Frisa Industries and her benefactor in the LDM scholarship.

“She said, ‘Let’s see how we can get to him.’ I sent him a video about what his support would mean. Then Musi called me and said, ‘Eduardo Garza is going to support you again.’ I thought, ‘God sent me an angel to help me with my studies.’”

And so, the student arrived in Germany in September 2020 after overcoming several more challenges due to the COVID-19 pandemic. In Germany, she was a team representative in a global business competition at TUM.

“It was a challenge because there were seminars completely in German. Companies gave workshops and we had to present projects in the language.”

“A Jack-of-all-trades” in philanthropy

Lizzie was used to doing things for others from a young age. She always liked to participate in different support activities and being “a Jack-of-all-trades,” as her mother called her.

“I’ve always done volunteer things. For example, I liked going on church missions; I helped out a lot at one soup kitchen for children, helping them organize things for Children’s Day or Christmas; and I also went to nursing homes a lot.

“I also participated on committees in high school. I organized fairs to raise funds for the benefit of some cause,” she said.

One of the factors that also led her to receiving the Leaders of Tomorrow scholarship was being a young woman who wanted to have a social impact in her community, and she continues to have an impact by promoting the Leader-to-Leader scholarship.

“It’s a scholarship in which the same leaders help and do activities to raise funds to provide one more scholarship to another student.

In another of her facets, she has been an intern and collaborator at the Eugenio Garza Lagüera Institute of Entrepreneurship and is an ambassador of the Tec in the Babson Collaborative Student Network, a network of students from all over the world who promote entrepreneurship among young people.

“The best things come when you give up fear. There’s always going to be another bigger fear (...) but it’s something you have to overcome to grow.”

Today, one semester away from graduating as an engineer from the Tec in June 2022, Lizzie remains firm in pursuing her dreams.

“The biggest obstacle has been the clash of decisions or knowing what to sacrifice. At times, you sacrifice parties, but also at other times, for example, I was in Germany when my grandmother died. It was an internal conflict because I wanted to be with my family,” she recalls.

Lizzie also recommended coping with fears and doing everything you can to reach your goals.

“The best things come when you give up fear... There’s always going to be another bigger fear. I was scared the first time I spoke in German with my first client, and I know that living there alone may be scary, but it’s something you have to overcome to grow.

“I think the Tec opened many doors for me beyond just a full scholarship. The education it gives you makes you feel very prepared. In addition, student life allows you to discover who you are, whether in student groups, culture, or sports.”

Lizzie thanked all the people who have believed in her.

“For me, the most valuable thing (...) is that there are people who still believe in dreams. When you ask for support, they believe in your ability to achieve,” she concluded.