Jerónimo Moreno, who was awarded a 100% scholarship to study at the Tec, now wants to pass on his knowledge to help the community in Chiapas.
By Ricardo Treviño | CONECTA National News Desk - 12/17/2021 Photo Eric Ramírez, Jerónimo Moreno

“When I arrived at the Tec in Tuxtla (Gutiérrez), I spoke very little Spanish, because I spoke Tzeltal every day. It was difficult for me to explain what I wanted to say.”

That is how Jerónimo Moreno remembers when at the age of 18, he began studying Business Strategy and Transformation at Tec de Monterrey’s Chiapas campus, without having mastered the Spanish language.

The young man spent his entire childhood in the town of Bachajón, where everyone communicated in the Tzeltal language, typical of communities in the mountainous regions of Chiapas.

Thanks to his academic excellence from elementary to high school, his participation in social projects, and becoming state chess champion, Jerónimo received the opportunity to join the Leaders of Tomorrow program to study at the Tec with a 100% scholarship.

Now, the recent graduate from Monterrey campus has also learned English, and recounts what it was like to move to a city without having mastered Spanish to study his degree, with the hope of transforming his community.

“Being a Leader of Tomorrow means having a vote of confidence placed in us by donors, collaborators, and the Tec.”

“I thought they weren’t going to accept me.”

Jerónimo acknowledged that when he joined the Tec, he was afraid he wouldn’t be accepted, but he overcame this thanks to people’s kindness and his effort to learn Spanish with courses and daily interactions.

“Before arriving at the Chiapas campus, I didn’t think they were going to accept me. I was afraid (...) but I was surprised that, despite the language difference, people were kind and took the time to try to understand me,” says Jerónimo.

The young man says that although his mother tongue is Tzeltal, he could understand Spanish thanks to his father and his middle school teachers.

Jerónimo said that when he arrived at the Tec, he practically learned to master Spanish thanks to various remedial courses designed to align his level of knowledge with that of the rest of his classmates.

“The remedial courses helped me a lot because I went over all the grammar rules. Besides, I was already in a context where I needed to speak Spanish all the time: lectures, books, participations, transport, everything was in Spanish.”

What’s more, he had support during his studies at the Tec from the Leaders of Tomorrow program, which supports talented young people with 100% scholarships for studying at the institution due to their talent and social leadership regardless of their socioeconomic status.

Jerónimo remembers the words his mother said to him when he had to leave.

“She said to me: ‘Don’t be sad. It’s for your own good.’ That was the hardest part, saying goodbye to my family, especially my mother, because she motivated me to study. Even though she didn’t finish elementary school, she always told me that education was very important.”

As the seventh of 9 siblings, Jerónimo had never left his parents’ house in the municipality of Chilón, which is 5 hours by car from Tuxtla Gutiérrez, the state capital.

“At the end of every semester, I would go back to my town, and tears would come to my eyes when I had to return. It was a necessary sacrifice because my mother wanted to see me get a degree. She knew that life in the countryside is very difficult.

“At the end of every semester, I would go back to my town, and tears would come to my eyes when I had to return. It was a necessary sacrifice because my mother wanted to see me get a degree.”

Another challenge he had to face was his fear of getting lost in the city.

“Going to a city much bigger than my town filled me with fear, it was mainly the fear of getting lost, because I didn’t know the way around, nor did I know how to (speak Spanish). I’d never been to Tuxtla. Fortunately, one of my brothers already lived there and he was the one who helped me.

“I did get lost at some point because there was a bus that had the same name but two different routes, and I took the wrong one. I had to get off once I realized and luckily, I found my way back,” he remembers with a laugh. 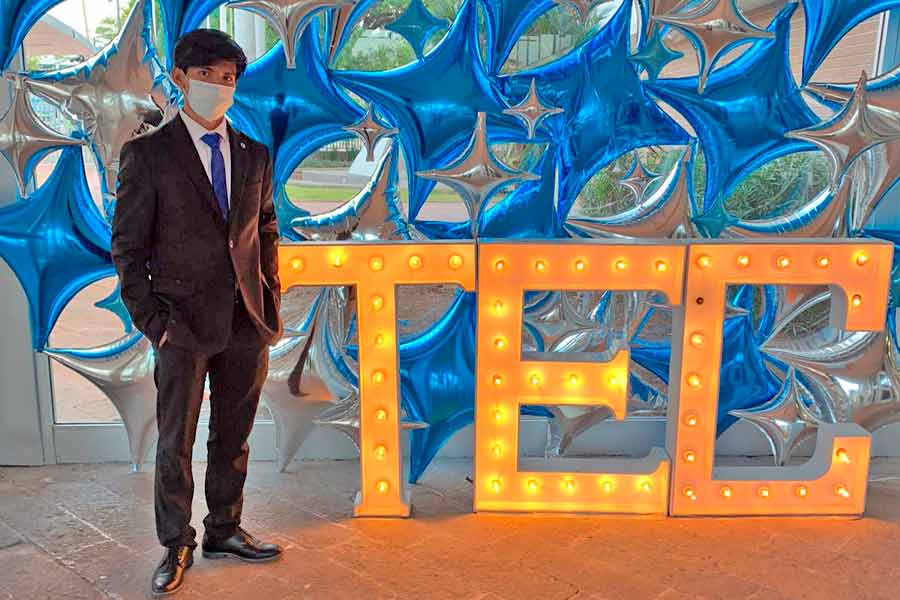 Graduating with English and fulfilling his sister’s dream

The Leader of Tomorrow will be part of the December 2021 generation from the Tec’s Monterrey campus after 6 semesters, which he started at the Chiapas campus.

The student from Chiapas has now not only mastered Spanish but has also learned to speak English through courses he was taking at Tec with a view to obtaining a better education.

“At the Tec, they taught me Business English. I began using terms I didn’t even know in Spanish, so I had to learn them. I took online courses with different universities. Over the summers, they usually invited professors from British Columbia University.”

The young man describes how he first heard about Tec de Monterrey, when one of his sisters wanted to join the institution. However, she was unable to secure a scholarship and it was difficult for her family to afford her college education.

“I learned about the Tec at the end of elementary school. Once I was older, I kept checking different calls for scholarships, but my family couldn’t cover any of them. They told me to look for other options.

“A year before leaving high school, I found out about the Leaders of Tomorrow scholarship. My math teacher told me. I was always focused on doing everything in my power to win it, because I wanted to fulfill my sister’s dream through me.” 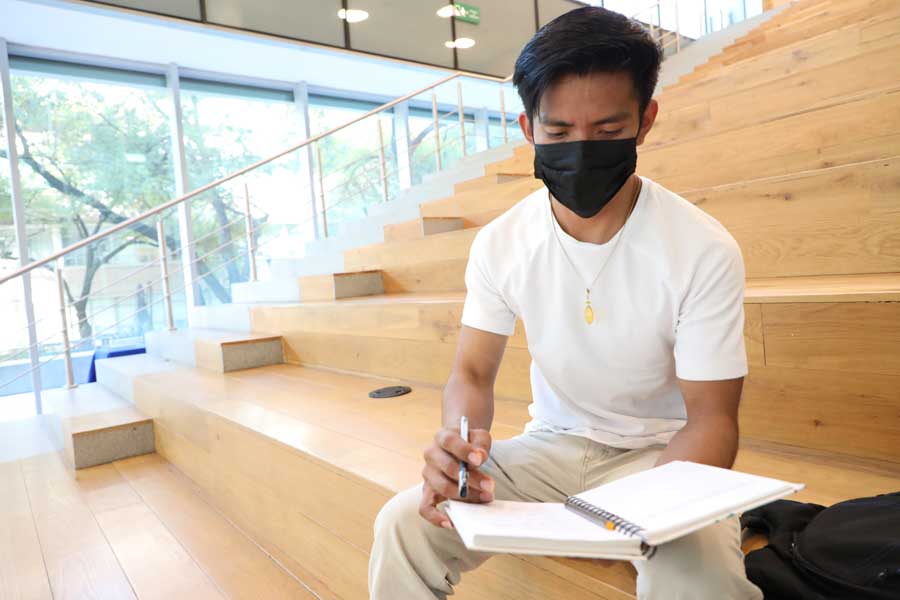 Participating in social projects focused on his community

Jerónimo actively participated in social programs, seeking to improve his community. He wants his people to do well.

From a very young age, the Tec student became aware of the difficulties faced by inhabitants of his native region: families were large, and the farming work focused on cultivating corn, beans, and bananas barely provided enough to survive.

Jerónimo’s father is a retired elementary school teacher, and his mother is a housewife. His family also works in farming in his native Bachajón. 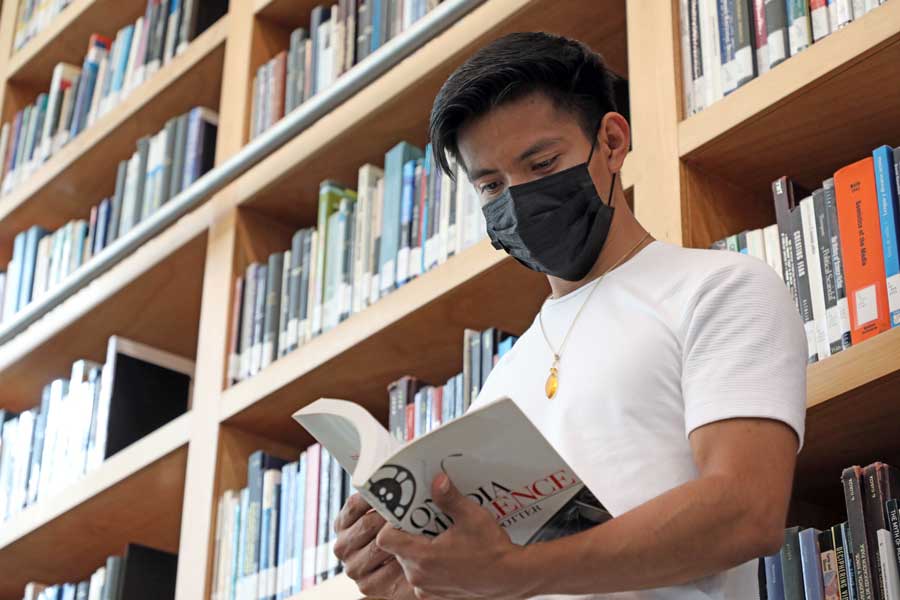 For this reason, he focused on developing a project to benefit his community.

“Several friends, my father, and I developed a project called Constrúyete, which was about growing backyard vegetables, i.e. in the family home, so that in addition to beans and corn, they could harvest the vegetables they normally had to buy.

“It occurred to us that we had to produce those products that weren’t produced in the fields. We managed to harvest products such as tomatoes, coriander, chives, chili, and other things. Around 50 families were able to meet their needs and sell the surplus,” he said.

That social conscience, his good grades, and his passion for chess, as he was state champion and promoted the sport in his town, led Jerónimo to obtaining a 100% scholarship to study at Tec de Monterrey, where he continued supporting social causes.

“When I told my parents I’d been accepted, they wept with emotion and congratulated me, but my father told me something very important: ‘Son, this fills me with pride, but remember it’s not only an award, but it’s a commitment, because the Tec is trusting you.’

“My father told me something very important: ‘Son, this fills me with pride, but remember it’s not only an award, but it’s a commitment, because the Tec is trusting you.’” 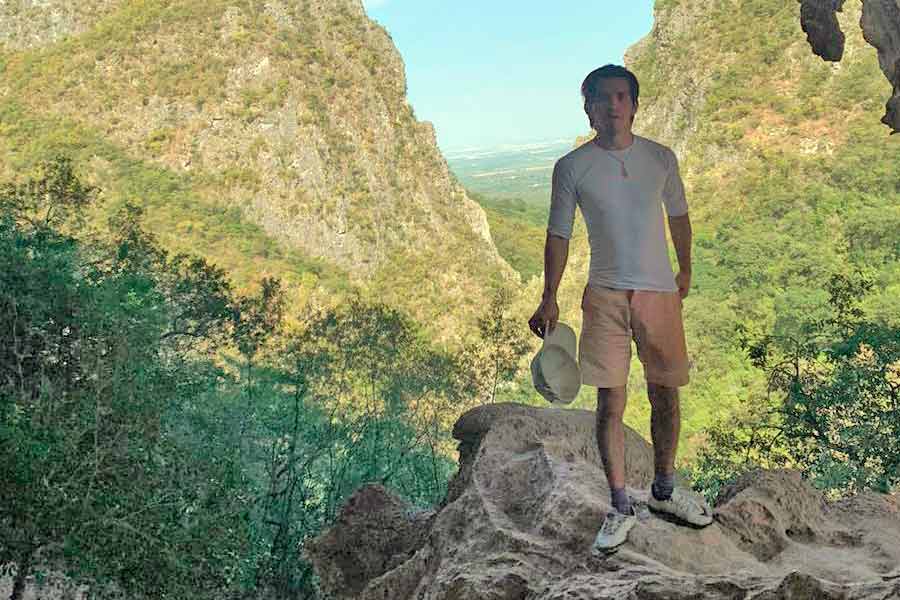 Seeking to return to improve his community

Jerónimo says his next goal is to find a job opportunity to pursue the career for which he studied.

“I’d like to work for a few years with the aim of gaining a lot of experience. One of my goals is to return to Chiapas and take technology there, such as for sustainable agriculture, so the land becomes more productive.

“Being a Leader of Tomorrow means having a vote of confidence placed in us by donors, collaborators, and the Tec. It’s an opportunity to show we can do our bit to transform society,” he concluded.