“Years ago, I was present at an award ceremony where an Argentinian construction company won, and I said ‘I want to be there one day,’” recalled Damián Pizá, founder of Pizá International, which was given an award by the Construction Management Association of America (CMAA) in 2022.

Ten years after that event, the Tec graduate’s company was given an award for excellence in the Construction Project Management category for construction of the “Otay Medical Tower” in the city of Tijuana, Baja California.

“Winning this award required a huge effort, especially because we are a family business,” he explained.

Pizá International received the “2022 Project Achievement Award” from the Construction Management Association of America, which is an industry association dedicated to professional construction management.

The association recognized “The Best of the Best” in construction project management and administration worldwide on August 22.

Pizá International has become the first Mexican company to be given an award by the CMAA and only the second in Latin America.

In addition to this award, Damián Pizá’s company was also given the Global Best Project award by the Engineering News Record (ENR), one of the construction industry’s most important global news magazines.

“Pizá International was recognized, along with 34 other global projects, by the ENR. We are the first Mexican company to form part of this list,” he explained.

He explained that some of the factors that led his company to win both awards included the application of technologies such as virtual reality, virtual construction, and analytical intelligence

Damián graduated from the Monterrey campus with a degree in Civil Engineering and holds a Master’s Degree in Construction Administration. He was able to enter the field of Project Management when he founded his company Pizá International in November 2009.

“It took several attempts before I finally created my company; the greatest opportunity I had came thanks to the Tec’s international programs, as I was able to spend a year at the University of Texas.

“That exchange gave me a taste of how what I wanted to do in México was already happening in the United States,” he shared.

The Tec graduate added that an important part of creating a startup in this field of construction was to transfer the U.S. methodology to Mexican processes, which represented a business advantage.

“As a business owner, my philosophy and values are based on the lessons I have learned.” 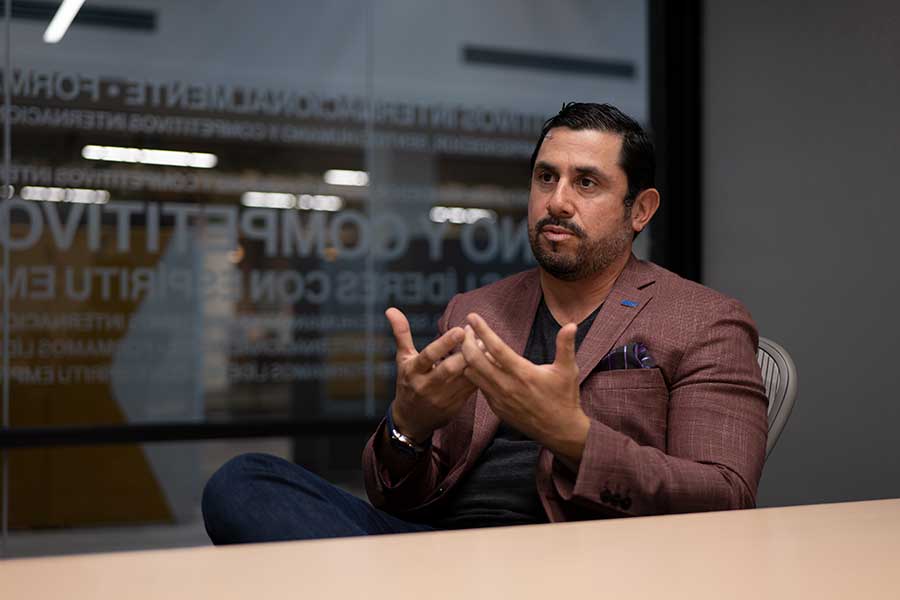 “I think what makes us better than those using a traditional methodology is that we include emerging technologies. We’ve also started to train our architects in three-dimensional modeling.

“As project managers, being able to do this is incredible because I can foresee many things that could happen, risks that we can avoid: that was essential for us to incorporate,” he said.

From hard work to heart work

We realized that failure doesn’t always happen because of costs and delays, he added, but that we had to focus on communication, collaboration, and coordination to make the business work.

“As a business owner, my philosophy and values are based on the lessons I have learned, but something that I’ve always been clear about is that I want us to go from hard work to heart work,” he said.

Damián Pizá also wants to implement his innovations in social projects through a vision for the future focused on new processes and technology.

“We want to work on more non-profit projects such as the renovation of public schools in Mexico, in addition to continuing to promote this technology,” he concluded.