The technology created by this Mexican to cool the heads of high-performance athletes was tested at Tokyo 2020.
By Asael Villanueva | CONECTA National News Desk - 08/06/2021 Photo Courtesy from Gustavo Cadena

Gustavo Cadena Schlam is looking at a screen broadcasting the Tokyo 2020 Olympic Games when a smile appears on his face as he sees that his invention, a sports band, is on the head of not only one, but several athletes during the triathlon.

His creation, the Omius band, uses nanotechnology to evaporate sweat and create a cooling effect on athletes’ foreheads. Gustavo says that he couldn’t help but get excited when he saw it being used on the other side of the world.

Weeks before the event, the 30-year-old Mexican had sent some bands to competitors with the intention of testing their effectiveness, but it was not until the day he saw the broadcast that he realized they were being used.

He had been working on the project since 2013, although back then he wanted to create a vest to avoid the heat he felt in the Mexican city of Monterrey.

After years of challenges, research and development, testing on Tec de Monterrey sports teams, and chasing investment, Gustavo can now show off the photographs of his invention being used by the sports elite at Tokyo 2020.

A design that cools at a microscopic level

Cadena, who holds a degree in Engineering Physics from Tec de Monterrey, developed a band that uses nanotechnology to cool athletes’ heads, evaporating sweat in the process.

“(The material) amplifies your skin’s surface area. It’s like a car radiator or a heatsink.

“We’re basically replicating how machines cool down, but we cool the body with a material that doesn’t affect the skin and that works with sweat,” explains Cadena.

Gustavo explains that the band uses sweat and spreads it over a larger area, not just on the skin but on the cube-shaped material of the band itself.

The engineer says that the human body uses the evaporation of sweat to generate a cooling effect. So, the Omius band seeks to replicate that effect 5 times more than the human body, generating greater cooling.

The band can help athletes improve their performance but also prevents heat stroke, which according to TecSalud’s Dr. Rocío Robles is when the body temperature rises above 39.4 degrees Celsius and can cause vomiting, breathlessness, respiratory problems, and confusion or loss of consciousness.

“We’re basically duplicating how machines cool down, but we cool the body with a material that doesn’t affect the skin and works with sweat.”

At first, no one believed in his product

Gustavo and his team had a mission before Tokyo 2020 started: getting athletes to use the cooling band.

So, he and the team from his Omius company began to contact the Olympians through social media and email.

“Weeks before we sent the bands, we didn’t know if they were going to use them,” says Cadena.

Some of the previous tests included amateur runners and even participants in competitions such as the Ironman triathlon.

Gustavo says that developing the Omnius band wasn’t easy. Challenges such as manufacturing are some of the biggest that he has faced, as the workshop is in his own home.

“At first nobody believes in your product and people don’t want to use it, they say the band looks weird.

“We got stuck in rut because we tested it with a club of (amateur) athletes who said it worked, but maybe they wouldn’t buy it,” Gustavo said.

“It was exciting to be able to see it and realize that you can have an impact on a global scale if you make a good product, even if you have a bunch of machines installed in your home.”

Instead of stopping, Gustavo thought about taking it to the next level: testing the cooling band with high-performance athletes.

“We gave it to professional athletes. They noticed the change in their performance, and we changed our strategy. (Now) they are our market,” Gustavo says.

The band had fulfilled its purpose on the foreheads of high-performance athletes, and they spread the word: “There’s a Mexican product capable of evaporating sweat and cooling you down in the process.”

This is how the invention reached the foreheads of triathletes such as Austrian Lisa Perterer, Frenchman Léo Bergere, and Belgian Marten Van Riel, who won fourth place in the individual triathlon, although he was leading at times during the race.

“You could see how they came out of the water, and they were putting (the band) on. There are shots with several athletes using it at the same time and one (the Belgian) was in the lead.

“It was exciting to be able to see it and realize that you can make an impact on a global scale if you make a good product, even if you have a bunch of machines installed in your home,” says Gustavo smiling.

After some of the athletes had trained with the Omius band, some of their teammates began asking Gustavo for some to try them out.

It was then that even some of the Olympic federations from countries like Brazil and the Czech Republic contacted him to make a request: “We want to test your technology.”

Cadena was studying Engineering Physics at the Monterrey campus in 2013 when he decided to create a vest to help him sweat less, as he claims that he’s always hated the heat.

“I’m from Veracruz. When I went to Monterrey, I was always hot,” he remembers, laughing.

“I was one of those people who was always worrying if it was going to be very hot somewhere,” he says.

Applying his knowledge, he began to design a vest that could regulate the temperature, creating prototypes with apertures that opened and closed according to the user’s thermal needs.

“There were many complications. The technology wasn’t ready, and I needed something that was cheap and functional. It was risky,” he says. 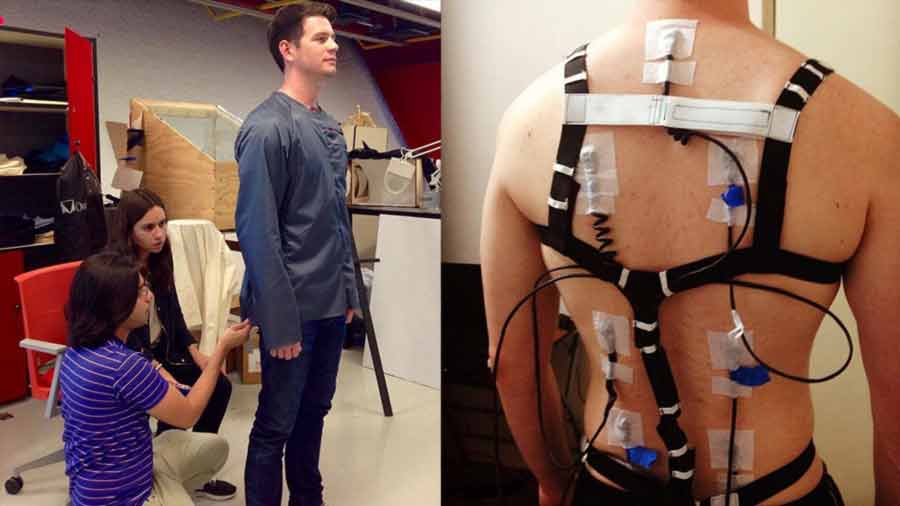 Then Gustavo decided to start another project: to design a material that could simulate an air conditioner for motorcyclists.

This material could cool a surface with its microscopic characteristics, so Gustavo thought about integrating it into clothing.

He first thought of t-shirts, but as it wasn’t that flexible, he later decided to apply it to a headband. Omius was born.

“Making products that can serve athletes, but also field and industrial workers. Our aim is to try to cool humans down.”

Development of the project was carried out at the same Tec de Monterrey where Gustavo studied his degree, in an incubation program at the university.

It was there, in a place called Innovaction Gym, that he did the second test of the band on people after Gustavo had tested the technology on himself.

“Before starting to test it on athletes, I did the first tests at the Tec. I went to the basketball team coach at practice at 7 or 8 in the morning and told him I wanted to see if it worked.

“He told me: ‘Give it to that guy’ and I stayed in the training. Then we tried it with tennis players, then the athletics team, and so on, until we reached the triathlon market,” he says.

After the first tests, there were things to adjust, but Gustavo had got what he wanted, the band was working, and it was time to take it to the next level: the high-performance athletes at Tokyo 2020 were his next target.

The next step on the road to cooling humans down

After the Tokyo 2020 Olympic Games, Gustavo points out that he will seek to improve the Omius band at a lean manufacturing level.

“It’s not sustainable to make it at home. Especially because people are asking for it. We’re designing production processes, scaling to manufacturing, and maybe collaborating with more people,” Gustavo says.

He also says that after the challenges brought about by the pandemic, they want to create other products and applications such as helmets for cyclists or even partnerships with established sports brands such as Nike.

“The pandemic was very hard because they canceled the races and people bought them for that, so I also had to look for other sources of income,” he says.

That’s why Gustavo is also collaborating with a German company to use the material he designed in the band to create more efficient air conditioners.

One of the main motivations for designing something that could help you feel less warm is that there was nothing satisfactory on the market.

“In the clothing industry, the way they solve cooling is by using less product: thinner and more porous fabrics to remove the heat. It was something that seemed very strange to me.

“That’s how the idea was born, and it was thanks to the tools from my degree that I was able to build something,” Gustavo says.

Currently, the band costs 159 dollars and continues to be at the sales and testing phase.

When asked what dream he is trying to achieve, he’s not far from when he was a student concerned about the temperature of the place he would be.

“The goal of Omius is to adapt humans to an increasingly hot planet. A heat caused by global warming.

“Making products that can serve athletes, but also field and industrial workers. Our aim is to try to cool humans down,” he concludes.

The bionic arm startup which seeks to empower its users

Preserving Mayan backstrap weaving in Chiapas: how Tec got involved