The cars converted by the Tec graduate don’t pollute the environment and are silent because they don’t have internal combustion engines.
By Ricardo Treviño | CONECTA National News Desk - 01/27/2022 Photo Alejandro Salazar

As a child, José Eduardo Villagómez received a remote-control car as a gift. He imagined what it would be like to travel in that battery-powered car.

Growing up around cars at his father’s workshops, he realized that gasoline engines were not like the toy of his childhood: they polluted the environment with smoke and noise.

Looking around at the oil, grease, and lubricant stains on the shop floor, he wondered how he could make those same cars stop polluting the environment.

He decided to convert cars to electric vehicles that, like his toy, would work with a battery-powered motor.

Now, the challenge for the Tec de Monterrey graduate in Business Administration and Strategy is to grow his business by showing that it is feasible to use electric motors, in an accessible way, to prevent pollution. 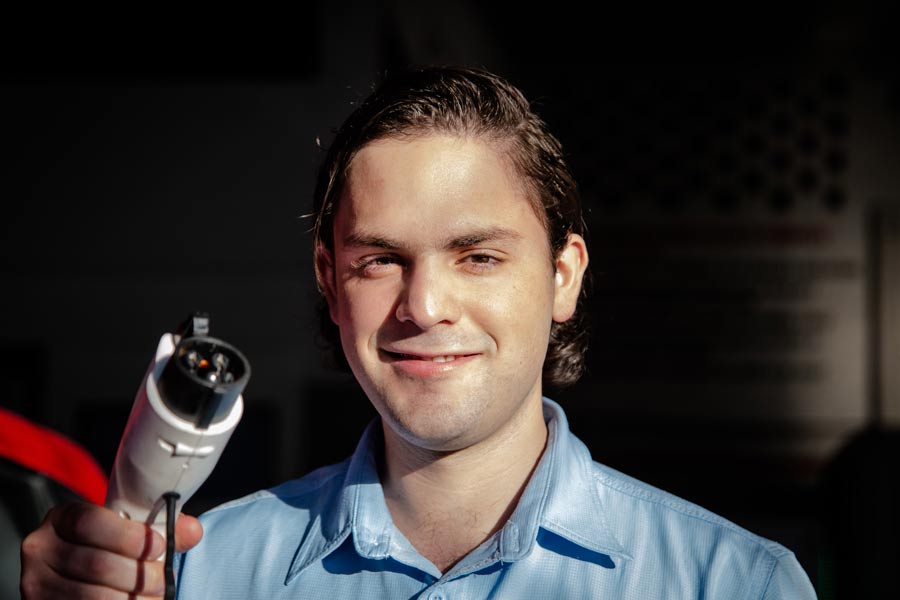 José Eduardo thought about how he could make vehicles that were less polluting, using his knowledge of mechanics that he acquired from helping in his father’s workshops in Monterrey when he was a child.

Together with his father, he created his company E-V-H (Electric Vehicles & Hybrids) in the same city, with the goal of stopping more vehicles emitting tons of pollutants that affect the atmosphere.

“The concept already existed. I found a company in France and another in California that do this only with vintage Porsches. We put together different components and adapted them for our own system.

“We don’t want expensive or high-end cars, we want electric cars to be accessible to everyone, that everyone can have, that can be connected at home, and that make an impact on the environment.”

“I decided to get involved to improve air quality in Mexico and create accessible electric cars for everyone.”

The challenge of converting (and reviving) the first electric car

José Eduardo tells CONECTA that the conversion of his first electric vehicle would largely define the viability of his nascent business.

The opportunity presented itself in something akin to what you see in science fiction movies: reviving a “dead” vehicle. Their challenge was a truck with an engine that had been damaged when it ran out of oil.

“The first vehicle we converted was a Hyundai H100, a pick-up that had thrown a rod.

“We removed the catalytic converter, the muffler, the gas tank, and the engine, and we attached the batteries and other components such as the electric motor,” explains José.

After a couple of weeks, the truck came back to life thanks to that engine “transplant,” thus demonstrating that he could carry out these conversions.

“I’ve been very hands-on. The first vehicle we made was built by one of our engineers and myself, tightening the screws by hand in order to learn,” he said.

Within 6 months of founding his company, the 23-year-old Tec graduate has converted the same number of vehicles to electric cars. 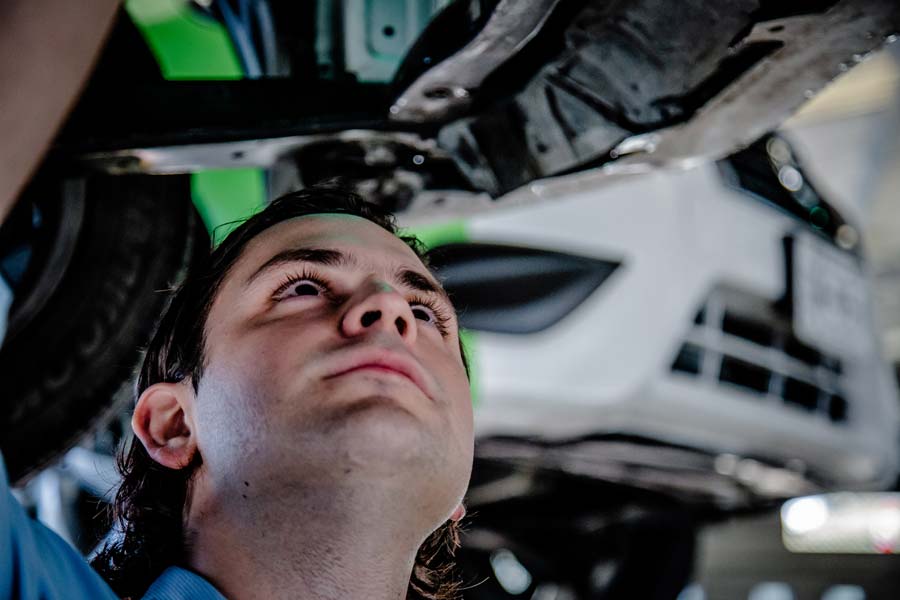 Advantages and disadvantages of an electric car

The entrepreneur converts compact, sedan, and pick-up vehicles, with three engine options, 72, 96, or 140 volts, capable of reaching 120 kilometers per hour and up to 500 kilometers of travel.

Currently, converting a vehicle to electric takes about two weeks.

“When you show people the car, they ask you to turn it on, and you tell them that it’s already on. An electric car doesn’t make any noise if you don’t accelerate.”

“When you show people the car, they ask you to turn it on, and you tell them that it’s already on. An electric car doesn’t make any noise if you don’t accelerate.”

“With an electric system you no longer pay for gasoline, you no longer have problems with engine parts, and you can enjoy your car without worrying about maintenance costs or that it might break down (if it’s a classic car),” he adds.

Another benefit is that you don’t pay vehicle tax for electric vehicles in some Mexican states.

José Eduardo also recognized that Mexico is producing more of the electricity that these cars use, without fossil fuels, and without affecting the environment so much.

“Yes, producing electricity creates pollution, but refining gasoline and all those processes create even more, and obviously the internal combustion engine pollutes the city directly.

“For example, you’d die if you were to cover the exhaust on your car and breathe it in. That’s what internal combustion engines are putting into the city. There are also more and more advances in the generation of renewable energies,” he said.

Bringing damaged cars and classics back to life

In his startup, the Tec graduate not only focuses on serving companies with fleets of cars, but also classic car collectors who want to “revive” their cars.

“We call it reviving and recycling dead vehicles. All the ones we’ve fixed were dead, they had no engine, and we gave them a new lease of life.

“Those who have classic cars also have the problem that they struggle a lot to get parts. Having so many years of life, many of those cars are not reliable, because you run the risk of being left stranded,” he said.

Some of the classic cars that they are about to start converting are a 1959 MG Roadster, and a 1990 Tracker truck, which will be raffled to raise money to plant trees in Monterrey’s Fundidora Park. 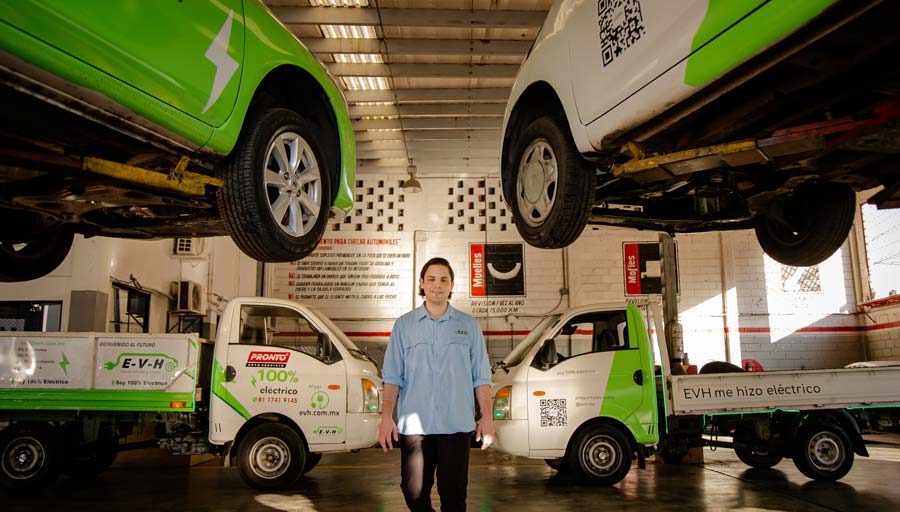 His own experience: charging a car as if it were a cellphone

In December 2021, José graduated from the Monterrey campus. During his last semester as a student, he drove around in a Nissan Sentra that he had converted to electric and which he now uses on a daily basis.

“As the Tec is supporting the area of sustainability, they’ve put a charger in the parking lot. It was very convenient because I arrived, parked, and connected my car. By the time I returned from my classes, it was already fully charged,” he recalled.

He talked about how you can recharge your car for free in shopping malls and establishments equipped with charging stations, and how also you can plug it in at home and charge it for four to five hours as if it were a cellphone.

His dream: accessible cars for everyone

José said that these modifications have different costs depending on the project, with financing options that aim to make it possible for anyone to convert their vehicle.

He mentioned that he has also approached courier and executive taxi companies to offer them conversion services for their fleets.

He estimates that by converting to electric, each vehicle stops emitting around 10 metric tons of CO2 per year, which he considers an achievement for the environment.

“At the Tec, I received training in finance and strategic management, which have helped me as an entrepreneur to adapt to any situation. In addition, the institution teaches you to be ethical and makes you aware of your commitment to society and the world around you,” he said.

He sees a future with more and more electric cars, and he is willing to adapt to new needs.

“There will always be something to do: battery programming or maintenance, for example.”

Until that future arrives, José Eduardo has already begun his journey on the road of electric cars with one idea in mind, “to improve air quality in Mexico and create electric cars that are accessible to all,” he concluded.