Ana Elena Mallet, first distinguished professor at Tec de Monterrey’s School of Architecture, Art, and Design (EAAD), is an experienced independent curator for museums and cultural spaces in Mexico and around the world.

She sits on the acquisitions committee of the Museum of Modern Art (MoMA) in New York, the first Latin American woman on that board.

She has also collaborated with museums such as Franz Mayer, Soumaya, the Art Institute of Chicago, and the Los Angeles County Museum of Art, and others.

“The two most important disciplines for me are art and design. Art is the discipline that brings the problems of contemporary life to the table, and design is the one that provides solutions to them,” she explains.

Mallet remembers that the insistence by two professors for her to teach at the Tec led her to ask to give only one class as a condition since she thought she would be rejected.

The expected no turned into a yes

Ana’s condition to teach at the Mexico City campus was to teach only the subject of History of Design in Mexico since she thought they would reject her proposal.

“I thought, ‘They’re going to tell me no,’ because there’s no university in Mexico that teaches History of Design in Mexico. That doesn’t exist... but they told me, ‘Go ahead, we’ve arranged it,’” the professor recalls.

Her arrival at the Tec was at the insistence of the professors Moisés Hernández, director of studies, and Ramiro Estrada, says Mallet.

“I’d taught classes before and stopped giving them to do a master’s degree. I didn’t want to go back to that, but Ramiro and Moisés were insistent,” says Mallet.

After three years of that insistence by both professors, Mallet now gives a class in History and Theory of Fashion in Mexico and the World, focusing on Art, objects, and fashion.

“The students at the Tec are very diverse. They’re people from different sociocultural backgrounds with a lot of curiosity who are very aware of their privilege and want to make the most of that privilege,” she says.

“The students at the Tec are very diverse. They’re people from different sociocultural backgrounds with a lot of curiosity who are very aware of their privilege and want to make the most of that privilege.”

The first Latin American on MoMA’s board

Mallet describes what it means to work for a museum like MoMA in New York.

“It (MoMA) is the museum that has set the tone for many things, such as design history, with the way they put together collections and put on exhibits. It’s been a learning experience to see it from the inside.”

From 2010 to 2012, she directed the Destination: Mexico project, in which she brought together the work of 60 Mexican designers, which was distributed to MoMA shops in New York and Tokyo.

“Most of the invitations from abroad are from people who know my work. It’s satisfying when someone from outside knows your work at the local level,” she says.

“It (MoMA) is the museum that has set the tone for many things, such as design history, with the way they put together collections and put on exhibits. It’s been a learning experience to see it from the inside.” 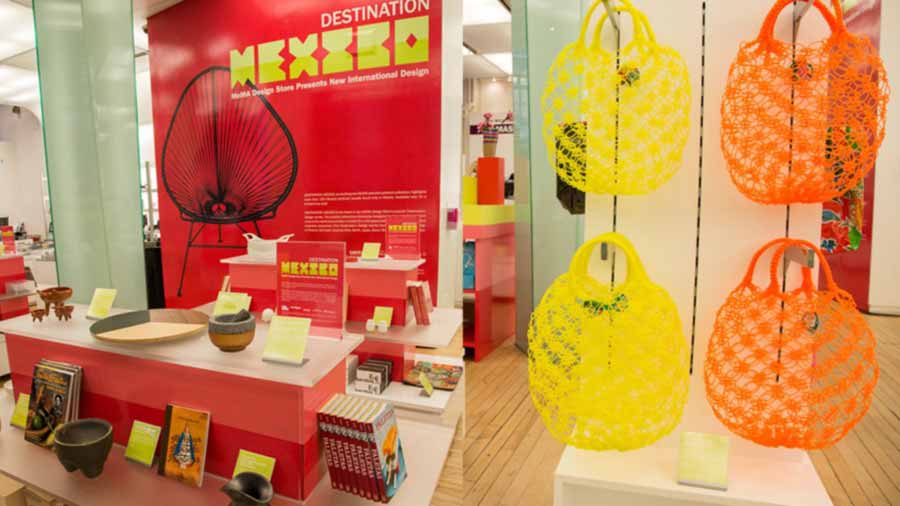 Mallet was EAAD’s first hologram professor, teaching multiple campuses simultaneously through a life-size holographic projection that can interact with students in real time.

“I’m from the generation that saw the Star Wars movies and then you see that that utopia can become a reality and that you can be like Princess Leia and be seen from Mexico City in real time in León or Torreón.

“That’s like saying ‘the future is here,’ and it’s very exciting to be in an institution that’s committed to this type of technology.”

At the same time, Mallet has promoted the work of her students with a project in which she invited them to work on creating mini fashion documentaries with iPhones. 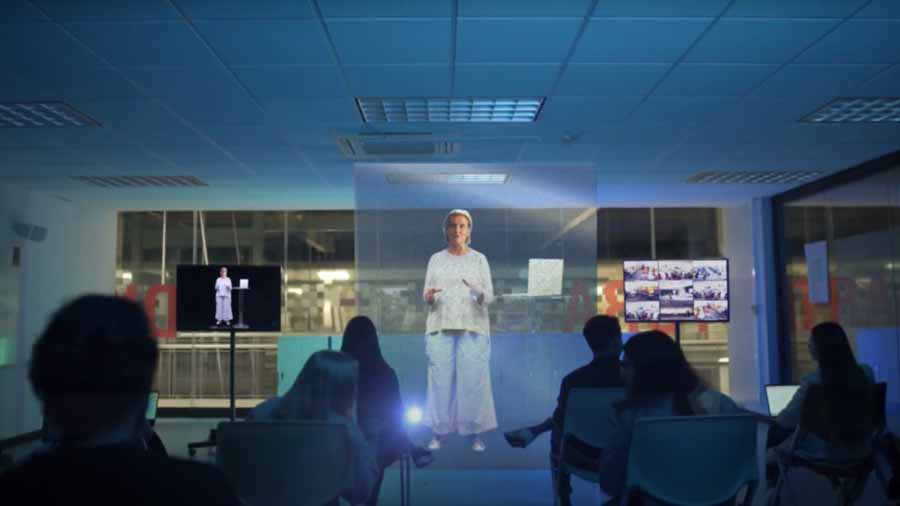 The museum that changed her life

When she was a child, Mallet dreamed of writing works of fiction, so she studied Latin American Literature at the Ibero-American University, but she found her calling by accident while doing her community service at the Tamayo Museum.

“I loved the work they did at the museum. I found it fascinating to understand the ‘guts’ of the museum and tell these stories. I decided I wanted to do that,” Mallet says.

“I didn’t want to proofread texts or edit a magazine. After doing my community service at the (Tamayo) museum, I started working at a contemporary art gallery and then at the Soumaya Museum, and from there I stayed in museum spaces,” recalls Mallet.

From then on, she began to collaborate with different museums, some of which she already knew, such as the Soumaya Museum, but also at others, such as the Museum of Contemporary Art (MARCO) in Monterrey.

From 1996 until 1999, Ana worked as a curator at the Soumaya Museum; from 1999 to 2001, at the Carrillo Gil Art Museum; and the following year, at the Rufino Tamayo Museum, decided to go independent.

Showing her father her talent through an exhibit

After that experience at the Tamayo Museum, Ana decided that her passion was for design.

However, she met resistance from her father, a doctor of French descent, who asked her not to choose design over, what he called, “a productive career.”

“He said I was going to starve. He thought I would take on the role of a married woman.”

Mallet focused on creating the first exhibit in Mexico dedicated to contemporary fashion, at the Carrillo Gil Art Museum, an exhibit at which Ana’s father congratulated her on her work.

“When I did the first fashion exhibit in Mexico, (my dad) realized the reach I had and told me that he’d changed his own idea. I didn’t feel like I had anything to prove to him anymore,” Ana says while smiling during the interview.

It was in that same exhibit, held from December 2000 to March 2001, that she brought together audiences that weren’t so close, she says.

“Fashion and design have the potential to bring together modern audiences. They’re relatable to people. In different countries, we get dressed and sit in chairs and drink out of cups every day.

“We identify with each other not because we all have paintings or sculptures, but because we do have chairs or blouses. The everyday life that design and fashion give us is part of Mexico’s cultural history,” says Mallet.

“The everyday life that design and fashion give us is part of Mexico’s cultural history.”

The challenges of being an independent curator

In choosing to be an independent curator Ana had different challenges and responsibilities than when she worked only for a specific museum.

“There is no curatorial career in Mexico. I learned from these amazing characters who were above me. I loved working in a museum, and when I decided to become independent, it was what I missed the most,” she says.

“As an independent agent, it’s about approaching them like a seller of encyclopedias or dreams. You go with your portfolio and say, ‘I have this idea, and I’d like to do it in this space,’” says Mallet.

“Most of the invitations from abroad are from people who know my work. It’s satisfying when someone from outside knows your work at the local level.”

The challenge of promoting something that doesn’t exist in Mexico

Ana looks up when asked about the biggest challenge of promoting art and design in Mexico and pauses for a few seconds before answering.

“(The most challenging thing) is living in a country that has no memory, a place where few archives and materials from the past are stored and preserved.

“It’s a huge challenge to tell a story when there’s very little material. You have to dedicate your time, money, and effort to it because there aren’t many institutions that want to collaborate, pay, and promote research,” says Ana.

Mallet adds that the challenge from the point of view of being a design historian is that institutions didn’t believe it was very important to exhibit design in art spaces and make room for designers to communicate their vision.

The belief that art and design are only for people of the upper class or those who don’t need to work and spend their time in art galleries are some of the prejudices that Ana says existed several years ago.

Mallet believed in something different, that art and design are present in everyday life, and she would work to convince the leaders of cultural spaces and others that both disciplines are more relatable than they thought.

“Art is the discipline that brings the problems of contemporary life to the table, and design is the one that provides solutions to them.”

She hasn’t left behind books entirely

Mallet didn’t abandon literature entirely, but instead of writing fiction as she dreamed of doing as a child, she decided to share the design and real stories of people with a similar passion through her books.

For example, in 2017 she published Silla mexicana (Mexican Chair), in which she conducts an investigation of chairs as objects, which was an exhibit that later became a book.

Similarly, in 2014, she published Bauhaus and Modern Mexico: Design by Van Beuren, which is about the life of this artist and his furniture factory.

In 2006, together with Óscar Salinas and Alejandro Hernández, she published El diseño de Clara Porset (Clara Porset’s Design), which narrates the life and work of Porset, a thinker and design theorist in Mexico.

She also recently published Felix Tissot, Lo eterno y lo moderno (Felix Tissot: Eternal and Modern), which is about the life of the French ceramist who arrived in Taxco in 1956 and promoted the ceramic industry in collaboration with indigenous communities.